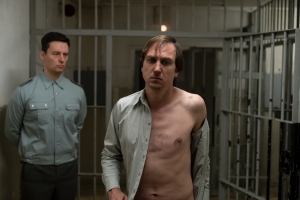 The story is set in 1981 and is inspired by a certain period in recent German history – namely, the GDR years. Nahschuss refers to the real-life character of Dr Werner Teske, on whom the story is based. Teske was assassinated in East Germany for political reasons, and  he was killed by a close-range gunshot.

Inspired by his story, the protagonist of the film is engineer Franz Walter, who is recruited by the Stasi, the State Security Service of the GDR, as an undercover informant. He rapidly gets into trouble because of his increasingly critical attitude towards the system and is accused of espionage. Starring as the main character is acclaimed German actor Lars Eidinger, supported by Devid Striesow, who plays one of his colleagues, and Luise Heyer as his wife.

In order to render the historical atmosphere as realistically as possible, the film has been shot in several original locations, such as the former ministry building of the State Security Service in Berlin-Lichtenberg and the prison of Hohenschönhausen, used during the GDR years.